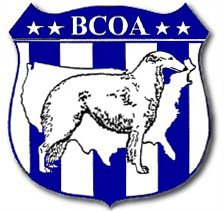 GENERAL APPEARANCE - The Borzoi was originally bred for the coursing of wild game on more or less open terrain, relying on sight rather than scent. To accomplish this purpose, the Borzoi needed particular structural qualities to chase, catch and hold his quarry. Special emphasis is placed on sound running gear, strong neck and jaws, courage and agility, combined with proper condition. The Borzoi should always possess unmistakable elegance, with flowing lines, graceful in motion or repose. Males, masculine without coarseness; bitches, feminine and refined.

HEAD - Skull slightly domed, long and narrow, with scarcely any perceptible stop, inclined to be Roman-nosed. Jaws long, powerful and deep, somewhat finer in bitches but not snipy. Teeth strong and clean with either an even or a scissors bite. Missing teeth should be penalized. Nose large and black.

EARS - Small and fine in quality, lying back on the neck when in repose with the tips when thrown back almost touching behind occiput; raised when at attention.

EYES - Set somewhat obliquely, dark in color, intelligent but rather soft in expression; never round, full nor staring, nor light in color; eye rims dark; inner corner midway between tip of nose and occiput.

SHOULDERS - Sloping, fine at the withers and free from coarseness or lumber.

CHEST - Rather narrow, with great depth of brisket.

BACK - Rising a little at the loins in a graceful curve.

LOINS - Extremely muscular, but rather tucked up, owing to the great depth of chest and comparative shortness of back and ribs.

FORELEGS - Bones straight and somewhat flattened like blades, with the narrower edge forward. The elbows have free play and are turned neither in nor out. Pasterns strong.

HINDQUARTERS - Long, very muscular and powerful with well bent stifles; somewhat wider than the forequarters; strong first and second thighs; hocks clean and well let down; legs parallel when viewed from the rear.

DEWCLAWS - Dewclaws, if any, on the hind legs are generally removed; dewclaws on the forelegs may be removed.

TAIL - Long, set on and carried low in a graceful curve.

COAT - Long, silky (not woolly), either flat, wavy or rather curly. On the head, ears and front of legs it should be short and smooth; on the neck the frill should be profuse and rather curly. Feather on hindquarters and tail, long and profuse, less so on chest and back of forelegs.

COLOR - Any color, or combination of colors, is acceptable.

SIZE - Mature males should be at least 28 inches at the withers and mature bitches at least 26 inches at the withers. Dogs and bitches below these respective limits should be severely penalized; dogs and bitches above the respective limits hould not be penalized as long as extra size is not acquired at the expense of symmetry, speed and staying quality. Range in weight for males from 75 to 105 pounds and for bitches from 15 to 20 pounds less.

GAIT - Front legs must reach well out in front with pasterns strong and springy. Hackneyed motion with mincing gait is not desired nor is weaving and crossing. However, while the hind legs are wider apart than the front, the feet tend to move closer to the center line when the dog moves at a fast trot. When viewed from the side there should be noticeable drive with a ground-covering stride from well-angulated stifles and hocks. The overall appearance in motion should be that of effortless power, endurance, speed, agility, smoothness and grace.

FAULTS - The foregoing description is that of the ideal Borzoi. Any deviation from the above described dog must be penalized to the extent of the deviation, keeping in mind the importance of the contribution of the various features toward the basic original purpose of the breed.

Visualization of the Borzoi Standard 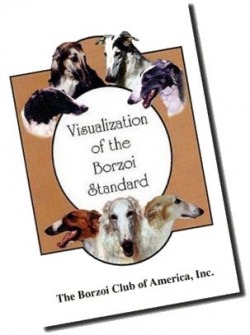 I encourage anyone interested in Borzoi to contact the Borzoi Club of America and purchase a copy of the Visualization of the Borzoi Standard booklet.  It is invaluable to understanding the written standard.